Today we review the winner of Comedy Showdown. Plus a little surprise announcement!

Genre: Comedy
Premise: On the last day of high school, two overlooked seniors execute a series of pranks to get their principal fired, while he does everything in his power to catch them and keep them from graduating.
Why You Should Read: It’s a throwback to all those 80’s comedies you know and love but updated for a 2021 audience. In a mash-up logline, it’s Ferris Bueller by way of The Fugitive. Or in a modern-take, it’s Booksmart meets Neighbors — a competition comedy that plays out like a boxing match, round for round with set pieces and surprises galore. All of which I wrote around two likable female leads — true underdogs facing off against their principal in a role that’s written for your favorite middle-aged comedy STAR. This isn’t just a script… this is a MOVIE. A movie I loved writing, and I think it shows. Above all other genres, I love comedies — but I also love action movies – so I wrote a comedy inspired by the structure of a fast-paced action movie – utilizing all that urgency and structuring pranks like set pieces. I also love the coming-of-age high school sub-genre – films that capture incredible characters in that unique time in their lives when they’re old enough to get themselves in a lot of trouble and afraid that everything in their lives is going to change. Senior Prank was a love letter to those movies, one that hopes to thrill and entertain you from page 1 until the very last line.
Writer:Freddie Farid
Details: 114 pages 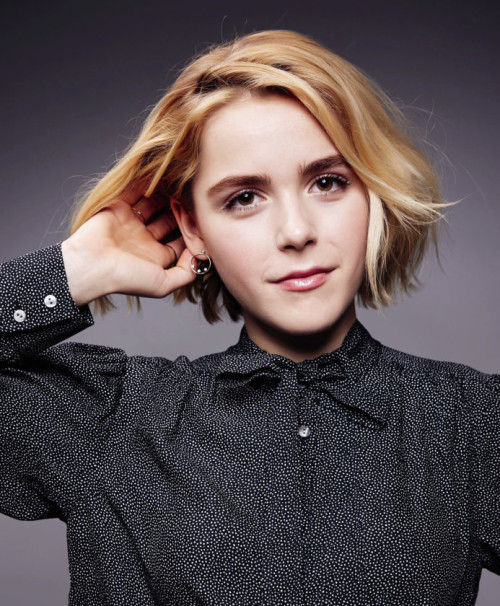 First of all, thanks to everyone who submitted to Comedy Showdown. I know how frustrating it must have been to practice your ass off for an entire three months then not even get a chance to race. But one of the ancillary benefits of these showdowns is that you now have a script. Go do something with it! Hollywood is your oyster.

When it came to Senior Trip, I was excited that it won. I liked what the writer did with the first couple of scenes. We’re introduced to this senior punk as our prank king, thinking he’s going to lead our story, only to realize, a couple of scenes later, when he’s all grown up and taken the principal job at his old high school, that he’s actually going to be the villain. That was a nice reversal. Let’s see how the rest of the script turned out.

OH! And about that surprise. I will be reviewing the TOP TWO scripts from every showdown going forward. Not just the winner, but second place. That’s right! Next week, I’ll be reviewing “Two In The Pink.” Yay!

Sean Beckett Riley used to be the most popular kid at school. Now, at 50, he’s the principal of the school. Which means he’s popular in a different way. As in a “all the students hate him” kind of way. But Principal Riley is okay with that. He’s a couple of days away from the superintendent granting him tenure. Then he can sit around and do nothing for the rest of his life.

Enter senior female best friends Alex (Batman) and Sadie (Robin). Alex and Sadie are “four likes on Instagram a month” kind of popular. As in, not popular at all. But that’s okay. Because all they want to do is have the best senior prom ever. Which ends up being a very “personal” experience since all the boys reject them and they end up going with each other.

Then, just as they show up, Principal Riley kicks them out for a minor school infraction. Furious, the two decide to ruin Riley’s life. They’re going to get him fired. And they only have one final day at school to do it!

That night, they mow “Fuck You Riley” into the football field grass and put a driver’s ed car on the top of the school. When the superintendent shows up to give Riley his final interview for tenure, he sees these things, and demands that Riley get to the bottom of it or else he can’t grant him tenure.

So Riley goes on a mission to find the pranksters, determined to bring them down. As the evidence starts to come in and it all points towards Alex and Sadie, they realize that if Riley figures them out before they can get him fired, they won’t just get a slap on the wrist, they’ll lose their college scholarships, their standing in society, their ENTIRE FUTURES. Which means: GAME ON. May the best man… err… or girls, win!

Senior Prank was a script I went back and forth on. I’d be laughing my ass off one scene then I wouldn’t be laughing at all the next one. I began to realize that Farid was really good in the area of comedic description, but not as sharp with comedic dialogue. Let me give you a couple of examples.

This opening scene with Riley was great. Riley is a 50 year old drunk man who’s just crashed his car into a tree at 5 miles per hour. A cop pulls up behind him. 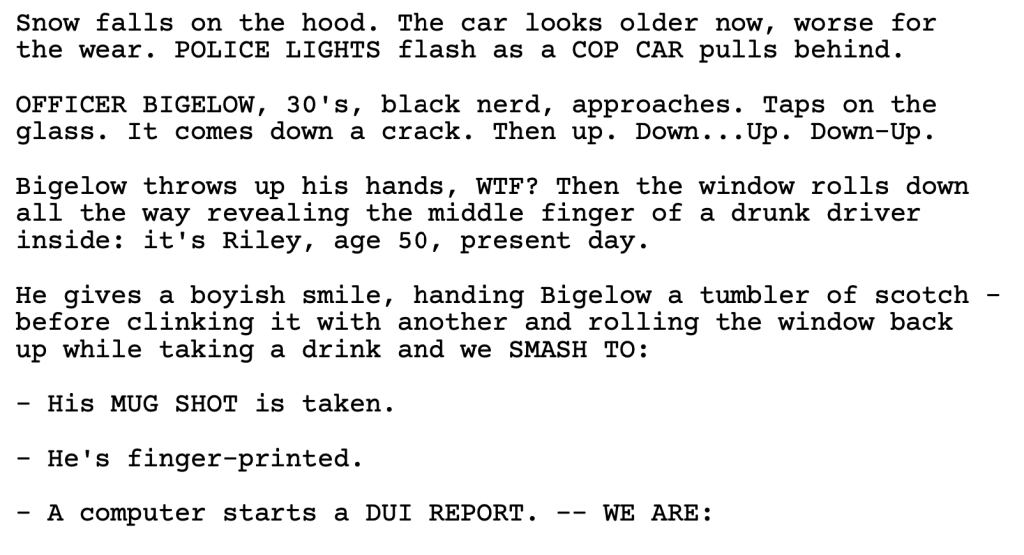 I love the little detail of the window coming down a crack, then back up, down…up, down-up. I can totally imagine that moment on the screen, with the sound effects of the window motor, leaning into the pauses between each “whirrrrr.”

The window finally rolling down all the way… to reveal a middle finger. A tumbler of scotch coming out the window from a disembodied hand. The officer receiving it like, “What the f$%#?” Then a second disembodied glass reaching out, clinking it. All of that was really funny.

However, a page later, we get a dialogue scene back at the station. It starts out fun, with the Chief recognizing Riley from high school and being smitten that he remembers him. We then get the following…

Let me be clear. I don’t dislike this dialogue. But none of it stands out. Riley pretending that he wasn’t at fault is somewhat of an expected comedy choice. Then, when Riley goes on the offensive, it feels a bit much. I read comedy dialogue like this ALL THE TIME. If you want to be a comedy writer, you have to be edgier, weirder, or unexpected with your dialogue choices. You can’t just do what everybody else does.

With that said, I did laugh out loud a handful of times. There’s this moment deep in the script where Riley’s clueless secretary brings him a cake celebrating the end of the school year, he slices into it, and there’s a dye pack inside that blows up all over Riley and the room. Riley demands to know who sent the cake. His secretary frantically, and cluelessly, explains that, “Uh, the cake was from… a uh… Señor Prank… Spanish fellow.”

The idea of this woman not realizing that “Senor Prank” was a prank had me in a giggling fit for several minutes.

But, like a lot of amateur comedy scripts, there were too many times where I was taken out of the story. The most obvious example is tenure. You don’t get tenure in high school. You certainly don’t get it as a principal. And since that’s Riley entire motivation, it was a failing grade on the script’s report card (I googled this to make sure – if it’s not true, I’m sorry).

This is a common mistake I see where comedy writers are under the impression that as long as they’re funny, the rest of the script can be sloppy. While it’s true that ‘funny’ is the ultimate decider, that other stuff has to be on lock to the point where it’s invisible, to the point where we don’t question it.

I mean, there was also a teacher at the school who went by “Professor.” So now I’m really confused. Are we in high school? College? Some combination of the two?

Yet another issue was that I couldn’t figure Riley out. To me, it should’ve been simple. Riley used to be popular, now he’s this miserable washed up principal who hates his life and gets stuck in this prank war with these high school kids.

Instead, Riley is both washed-up but also the women still love him (as we’re told early on at a bake sale). He both hates his job but he’s desperate to keep it. It’s confusing.

I see this a lot. You have this idea of what you want a character to be – in this case a washed up miserable principal. But then realize if he’s got nothing to fight for then why would he care if he lost his job or not? So you alter him so that he’s still kinda miserable yet part of him really loves his job, which is why he wants to keep it. And just like that you’ve created a character that makes no sense.

I get it. You need your antagonist to be motivated. But you have to pick a lane and stay in it. You can’t straddle the fence.

Finally, the main reason I couldn’t personally do anything with this script is because it’s way too similar to Booksmart, which was considered a failure. It got good reviews but the studio was hoping for a way bigger box office take than the movie ended up getting. So now you’re saying you’ve got the next version of a movie that didn’t do very well. Buyers don’t get excited about that.

I’m thinking the pendulum is swinging back to the middle here. Just make the main characters dudes. Or, if you still want to be original, one girl, one guy.

Senior Prank has the makings of a movie somewhere within its DNA. But right now, it’s too messy and it hasn’t yet capitalized on its concept. This feels like a script that needs to be put through the ringer. Bring in some other funny people to bounce jokes off of. Dialogue needs to be sharper, cleverer.

What I learned: I’m a big fan of seeing characters ACT. So, if they’re going to do something, let’s see them do it. This entire plot was built around the aftermath of them ACTING. They did the big pranks the night before (which we didn’t see) and then spent the day REACTING to the principal trying to connect them to the pranks. Something tells me it would’ve been more fun to actually watch them pull the pranks in real time. — (I know that this is the way The Hangover did it but that was different because it was the entire premise of the movie – you had the craziest night ever but couldn’t remember a thing about it).