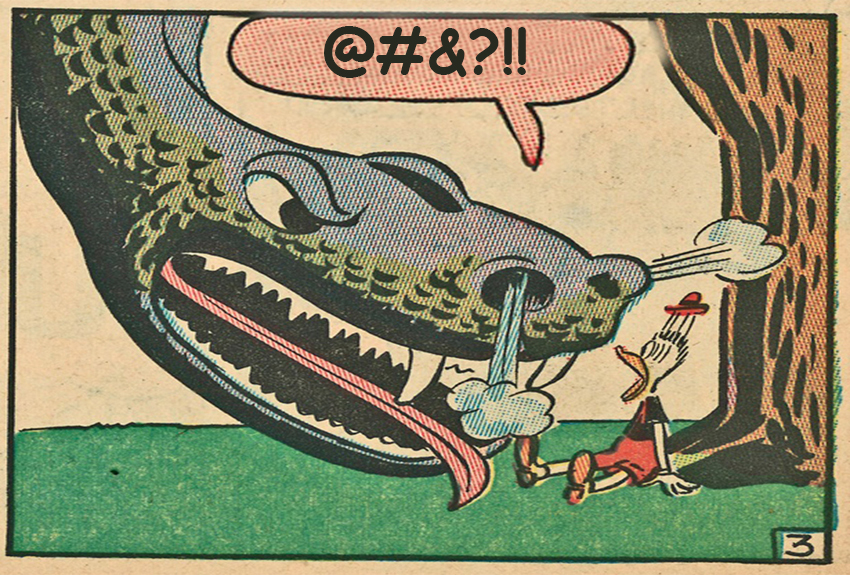 So. We cuss. Some of us cuss by saying mercy me or suffering succotash. I like to say shooty-pooty, which I learned from a nice Baltimore boy back in 1963. It’s a Cub Scout version of shitty-pity, which is a cutesy diminutive for just plain shit.

This kind of substitution for a cuss word is what linguists call an amelioration. It softens the blow while still addressing the topic. This is not the same as a euphemism, by the way, which tries to evade or screen the subject. Americans are big on substitute amelioration. We invent thousands of them daily, it seems. Darn for damn, gosh for God. They often sound as though we started to say the taboo word but caught ourselves.

Almost all of us have darker vocabularies if we’re pushed. We all have strong vocal reactions to pain and surprise, to anger or fear. We often use the same language in response to the strong positive stimulus of pleasure or awe or humor. Cuss words and phrases, whatever they may be in our individual vocabularies, are the most potent words we have for expressing emotion.

However, as writers, we now face a loss of power in the classic obscenities—the draining of shock value, the depletion of such terms’ ability to offend. Our challenge is to revive the language with vivid reinvention.

Case in point: I was out on my balcony a while ago as two young men walked by on the sidewalk and one of them was telling a story in which every other word was fucking. It went along the lines of, “So I fucking told the fucking guy that it wasn’t my fucking beer, I’m just fucking here for fucking apples… ” And so on.

Now this made me sad. Here is this potent word being drained of all its juice and snap by overuse. We often call such cuss words expletives. Technically an expletive is any word or phrase that adds nothing to the meaning of the sentence. A few years ago, for instance, TV reporters took to sticking in the phrase “if you will” in the most inane way. That was a smarmy, Uriah Heep–style expletive. For the guy under the balcony, the word fuck was an expletive. It had no more weight or meaning than like for the proverbial Valley Girl or um for the tongue-tied. It’s superfluous filler. It isn’t shocking. It isn’t vivid or engaging. It’s simply monotonous. He was boring and his story was unintelligible.

In real-life cussing we are probably at our most creative when on a furious roll, and ranting. At a time like that we might discover profound reservoirs of image and vocabulary. Or we might find ourselves stating the same lame word repeatedly. But we must always be on guard against mediocre cussing in our writing. If you’re a fiction writer, please don’t create a primary character who talks like the guy beneath the balcony. If you’re a nonfiction writer stuck with someone who talks like that, don’t quote him much. As writers we are not just allowed, we are required to decide how and when or whether to use cussing language.

A writer’s aim should be to give genuine thought to the use of this limited but significant vocabulary, and above all to avoid cliché and tedium.

Other cultures and tongues have their own powerful taboo language, and we can certainly learn from them. As English speakers, it’s worth thinking about the ways we use bad words and how to make our own use more vital and effective.

Now, linguistic researchers tell us that we learn to cuss early, usually between the ages of two and four. So this is primal stuff. We each have our own history and cussing language. For example, I remember how and when I learned the meaning of the word fuck.

This was back in 1950. I was not quite five years old and had heard the word all my life. My big brother and his friends said it when they were angry or upset. On the rare occasions when my mother said it, it meant we were all in serious trouble. My dad, the mechanic, made it into a poem. He’d be sweating under the hood of some gasping Ford or Chevy on a hundred-degree day, and he’d chant it. “Fuck the fuckity fuckin’ fucker.” Now this music of his delighted me. It became my secret song. Later in school I used it to learn the parts of speech and the forms of a sentence. This chant had it all. Verb, adverb, adjective, noun—action, modifiers, and subject—all in this one magnificently dangerous word.

Still, I had no notion what it meant; just that it was extremely bad.

Then one sleepy summer afternoon, Maggie Hatfield, the five-year-old down the street, climbed up our maple tree to where I was sitting and asked if I knew what fuck meant. Having this taboo broached out loud was stunning. I just shook my head.

The weight of this explanation rang true to the power of the word as I heard it, so I believed it completely. And compared to that, the puny definitions I learned later lack gravitas. But I’ll come back to this in a minute.

The words we view as bad vary from era to era, but they all have a lot in common. They snatch our attention. They smack us with the image they depict. Research substantiates this. Say, for example, that I provided a list that included a hundred ordinary words with two cuss words mixed in. Let’s further say I asked those in the room to write down as many as they could remember. The only two words that every single person would recall are the cuss words.

The power of curse words comes from their explicit literal meanings, but they are often used metaphorically. If you fuck up there’s no sex going on, but you have made a serious mistake. If you get fucked over, you’ve been betrayed. Saying What the fuck? expresses indignant surprise. If you’re just fucked, you are caught, inextricably, in a bad situation. But the word can also be benign. He was just fucking with you means he was joking.

Our strongest words are used metaphorically as well as literally. When we use bad words, they may not communicate much actual content, but they carry emotional TNT. They are all connotation. Bad words affect our brains and bodies in different ways than most words.

Most language is stored in the cerebral cortex—the rational decision-making part of our brains. But researchers now believe that swear words are stored in the ancient, reptilian amygdala, which is the seat of automatic actions, breathing, heartbeat, as well as reflexes, hunger, thirst, lust, and, most significantly, emotion. This is why people with Alzheimer’s or other forms of brain injury can still swear even when all other language is lost.

Why is this so? As in my case, learning the word fuck, we learn bad language as toddlers. We hear it said loudly or with intense emotion or in moments of crisis. We learn its emotional message before we learn the literal meaning, so it implants in our emotional core.

So when we hear it or see it written, and most of all when we use it, our bodies respond emotionally, with a degree of activation syndrome—the fight or flight response. Our heart rate and respiratory rate jump. Our skin’s electrical conductivity—what’s often known as the galvanic skin response—changes dramatically. We sweat.

This gives bad words real power to shock and to offend. Our response is immediate and emotional. We may also have intellectual reasons to be irritated, but that clicks in seconds behind the first, visceral reaction. This effect can be very mild or extremely intense, depending on the circumstances. Long before science was able to measure it, the law in many jurisdictions recognized our reactions with what were referred to as “fighting words” rulings. That is, some words were acknowledged to be so profoundly offensive that an immediate violent response was considered justified.

If you stub your toe or whack your thumb with a hammer, the first sounds out of your mouth may well be cuss words. There’s a good reason. Cussing helps us deal with pain. Recent studies show that people whose hands are immersed in extremely cold water can endure it far longer if they chant swear words such as shit than if they say nothing or repeat a neutral word like shoot.

In some circumstances, cussing also has an interesting psychological effect on those who hear it. Research shows that juries tend to view witnesses who use cuss words on the stand as slightly more credible than those who do not. Traditional cuss words are blunt language, directly expressive of whatever the person is talking about. Cuss words are manly. They don’t pussyfoot around any bushes. Cuss words call a spade a spade. So sometimes vulgar language is viewed as “truer” language.

These are all effects we can be aware of and take advantage of when we write. We should be conscious of eliciting these responses from our readers. We should be deliberate in embedding these responses in the people we create or describe. We must be alert to the fact that overuse will blunt the dramatic emotional effect, and can diminish it to nothing.

A fiction writer, journalist, and poet, Katherine Dunn was the author of the novels Truck, Attic, and Geek Love, a finalist for the National Book Award. She also published prolific articles and essays on the art of boxing, which she eventually collected in One Ring Circus: Dispatches from the World of Boxing. Katherine was a deeply admired instructor of fiction in Pacific University’s Master of Fine Arts Program and a lively member of Portland’s literary community. She was married to Paul Pomerantz, her Reed College boyfriend with whom she reconnected in her last years. Katherine died in May 2016 and is survived by her husband as well as her son and daughter-in-law, Eli and Sarah Dapolonia.

From On Cussing. Reprinted with permission of Tin House Books. Copyright © 2019 by The Estate of Katherine Dunn.