The article TED Talks for Writers: 6 TED Talks That Will Revive Your Storytelling Spirit appeared first on The Write Practice.

Looking for a boost in your creative writing? We all need something to rekindle our love of story. These TED Talks for writers might be just the inspiration you need. 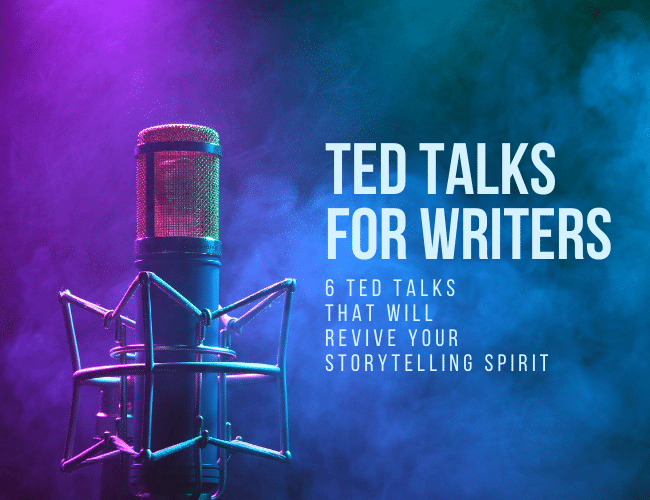 In your work as a writer, have you ever succumbed to the pity party? Why am I laboring away at something only a handful of people will ever read? Why am I spending all my time on something no one else cares about?

If you’ve been doing it long enough, you’ll have had those moments of doubt. My intention with this article is to provide help and inspiration to push through those barriers and restoke the fires of determined storytelling.

What I found in my forays for fuel to ignite that flame met—and exceeded—my expectations, reaffirming one of the fundamental truths I hold most dear: there is extraordinary power in story.

A favorite resource of mine when looking for inspiration is TED Talk territory. There’s a wide variety to choose from, they’re short, full of provocative viewpoints and stimulating ideas.

I perused the offerings pertaining to story this week and chose six TED Talks for writers. These presentations offer advice to writers that is worth watching. Turn to them when you need a boost, or a reminder about why you’re doing this.

“
Are you looking for inspiration? Take some time to watch one of these TED talks for writers.
Tweet this
Tweet

J.J. Abrams, creator of Lost and producer of countless major motion pictures, presents a wonderful tribute to his grandfather and teaches us a lot about creating compelling stories at the same time. He speaks about his childhood obsession with magic, and the magic shop he used to visit in his youth.

That’s where he got the Mystery Box, a cardboard carton, still sealed with tape, a fifteen-dollar bargain containing fifty dollars worth of magic. Unopened, to this day. Still a mystery, still inspiring stories.

Full of fun clips and sage advice on storytelling, Abrams shares the power of mystery and how to keep the questions coming. He also points out what to rip off when stealing from a story and how to help the audience suspend their disbelief. This is a little-known Hollywood secret regarding Tom Cruise’s nose.

For a wondrous sampling of magic and passion for storytelling, turn to this creative genius. Watch The Mystery Box.

Nigerian novelist Chimamanda Ngozi Adichie delivers a beautiful and moving reminder about the realities and dangers of seeing only a single perspective. In her talk, The Danger of a Single Story, she speaks of the influence stories had on her as a young girl growing up in Nigeria.

The majority of books available to her were British and American children’s books in which she read about people with different skin and hair from hers, unfamiliar food and climate, and experiences poles apart from her world.

These formed a “single story,” a one-sided perspective on which she based her knowledge and opinion of British and American people. She shares her experiences as she left home for a university in the United States, encountering many instances of that single-story-influenced thinking.

My favorite example is when she was a guest speaker at a college campus and one of the students, having read her novel which featured an abusive father, remarked that it was a shame that Nigerian men are abusers. She replied, “I just read a book called American Psycho, and it is such a shame that young American men are serial murderers.” It made her point beautifully.

Her presentation emphasizes the story has to resonate with an audience and spread a simple idea or challenging ideas. She says, “The problem with stereotypes is not that they are untrue, but that they are incomplete. They make one story become the only story.”

She also highlights how important storytellers are, because how the story is told can make all the difference.

Amy Tan, author of numerous books including The Joy Luck Club and Where The Past Begins, explores the origins and eccentricities of creativity in her TED Talk, Where Does Creativity Hide? She is wonderfully funny and frightfully forthright, sharing her personal journey in pursuit of creative fulfillment.

Are writers afflicted with brain abnormalities or personality disorders? What insanity drives us to do the things we do?

Amy posits some answers fashioned from her own brand of quantum mechanics as she takes a writer’s look at what happens, why things happen, how they happen, and so on.

Serendipity, coincidence, and a queer sort of string theory come into play as we each develop the cosmology of our own universe in our role as writers.

4. Making a Case for the Introvert

Susan Cain, author of Quiet: The Power of Introverts in a World That Can’t Stop Talking, speaks about the bias toward extroverts in today’s world, and the increasing amounts of stimulation in our society. Her TED Talk argues that some of us are introverts, and thrive in a quieter environment. She says solitude is often a critical ingredient for creativity.

She does not denigrate or disapprove of group activity, collaboration, or social interaction, but points out that people have varying degrees of preference and tolerance for these things.

Many, if not most, writers are introverts and she remarks that the irony for writers is that they indulge their preference for solitude while writing, then must overcome it in order to market the book.

She advocates for more freedom for introverts in the schoolroom and workplace, stating that we can benefit from unplugging and getting inside our own heads. And that doing so will boost our creative output.

Cover designer Chip Kidd delivers a unique first impression on his talk about the importance of imparting a sense of the story in your book cover. He shares a couple of little-known tricks of the trade, couching them in comic and illustrative anecdotes.

I especially enjoyed hearing his experience in designing the book cover for Jurassic Park and Michael Crichton’s reaction to it. And I found his discussion and examples of “typography in denial” fascinating.

As I mentioned, I enjoy TED Talks, especially TED Talks for writers. I visit YouTube now and then to browse through what’s on offer, but I have rarely been hit by one with such massive impact as Frank Warren’s presentation, Half a Million Secrets. Frank started an off-the-wall project that spawned a viral response from the public—and from me. Had me going through half a box of Kleenex while watching his amazing story.

Frank handed out 3,000 pre-paid postcards to random strangers on the streets of Washington, DC. The cards were blank on one side and printed with simple instructions on the other: Anonymously share an artful secret you’ve never told anyone before.

What he got back was an overwhelming number of postcard-sized stories that reminded me of Hemingway’s six-word gem—For sale: baby shoes, never worn.

Talk about a gold mine of writing prompts! Each one of these cards has a story behind it that we’ll never know. They’re secrets. But an innovative writer could find worlds of inspiration reading between the lines.

Frank posts a new selection every Sunday on his website, postsecret.com. Real secrets, shared by real people equals real opportunity to tell a story that resonates with real readers.

Storytelling Is an Important Job

Each of these TED Talks for writers presented a different aspect of the art and impact of story in our lives. But they all agree that Story is part of being human—it is critical to our success as a global society, as families and communities, as individuals. It’s an important job, and somebody’s got to do it.

Aren’t you glad it’s you!

How does story affect your life? Do you have any other TED Talks for writers that you love? Share your thoughts with us in the comments.

Ready to take a few anonymous words off a postcard and write the story behind them? Here’s one Frank shared in his TED Talk: “I found these stamps as a child, and I have been waiting all my life to have someone to send them to. I never did have someone.”

If that one didn’t light your fire, here’s another of Frank’s examples: “Inside this envelope is the ripped up remains of a suicide note I didn’t use. I feel like the happiest person on Earth! (now)”

If that one didn’t spark a story for you, try visiting postsecret.com and choosing your own prompt.

Write for fifteen minutes about your chosen postcard. When you are finished, post your work in the comments section, and be sure to give feedback for your fellow writers!