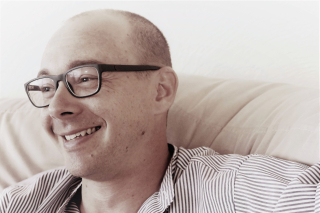 For the next two weeks, we will be publishing poems by Stephen Kampa [pictured left] chosen and presented by Mary Jo Salter. Out of nostalgia for the course catalogue of old, we are scheduling the six pieces for “M., W., F., at 10.” — DL

In “Homer at Home,” Stephen Kampa packs in so much wordplay about The Iliad and The Odyssey that even those who find the epic poet incurably unfunny will have to give up and laugh. Kampa paints Homer’s married life (“his Achilles’ heel”) and writing life (“his job, what job?”) as one of unending “hectoring.” Look too how Kampa’s rhyme scheme is as hard-won as the noblest battle: tercets that rhyme aab, bcc in sequence, so that they effectively wed as six-line stanzas. A game for a poetry workshop: how many hilarious puns can you find? And yet the way Kampa’s poem ends is no joke: with “Rage.” — Mary Jo Salter

He couldn’t, after all, be said to dwell in

A kingly castle when she gave him hell in

Every regard. Her tirades left him shaking:

Their match a disappointment—him a slob,

And all the drinking, and his job, what job?—

Until she ran him down and drove him mad.

The years of hectoring, the ill he had

To suffer—all of it now made him feel

That getting hitched was his Achilles’ heel.

Not that she hadn’t been worn down by his

The winding yarns he spun in his defense;

Not that she didn’t harbor a looming sense

That somewhere, somehow, both their ships had sunk

And bitters were the sea they now must swim in

(His frank entanglements with foreign women)—

So she admired the clean audacity

Of her old schoolgirl friend Penelope

Who, with a new man, knew no end to hope:

Penny had found it in her to elope

And now sent postcards (“What’ve you got to lose?”)

From ports (“To die for!”) on her wedding cruise.

One word. One word. To ward off the blank page,

He started with the most instinctive: Rage.

Stephen Kampa holds a BA in English Literature from Carleton College and an MFA in Poetry from The Johns Hopkins University. His first book, Cracks in the Invisible, won the 2010 Hollis Summers Poetry Prize and the 2011 Gold Medal in Poetry from the Florida Book Awards. His second book, Bachelor Pad (2014), and his third, Articulate as Rain (2018), appeared from The Waywiser Press. Kampa has been playing harmonica for twenty years and was named the 2012 Florida Harmonica Championships Overall Champion. He has worked as the harmonica player for a variety of bands, including Robert “Top” Thomas & the Swamp Kings, Victor Wainwright & the WildRoots, and the Old Kings. His session work appears most recently on Wildroots Sessions, Vol. 1.  He teaches English at Flagler College in St. Augustine, Florida.