Greetings Scribes, this has a bonafide chance be acceptable.

Today’s script is like an R-rated Princess Bride set in 16th Century Rome with a little Mission Impossible built in to boot.

Genre: Action/Comedy/Period
Logline: In 16th-century Rome, astronomical badass Nicolaus Copernicus seeks papal approval for his radical new theory about the universe, but after he’s framed for the Pope’s kidnapping, he’ll risk his life and legacy to track down the real abductors.
Why You Should Read: I’ve always loved history. I just wish it could be funnier. If I had a time machine, I probably wouldn’t use it kill baby Hitler. Instead, I’d just swap him with baby Charlie Chaplin who was born a mere four days earlier. But since the latest version of Final Draft is easier to get my hands on than a functioning time machine, I decided to write Renaissance Men. A hilarious adventure that pits some of Renaissance Europe’s biggest egos including Copernicus, Machiavelli, Nostradamus and Michelangelo against each other in a high stakes game of cat and mouse.

I had many reasons why I wanted to write this. First, I knew it would be a lot of fun. Second, I was sure I could generate a ton of laughs. And last but not least, because a story about how the rich and powerful will cover up scientific truth to protect their political interests is even more relevant today than it was 500 years ago.

Writer: Eric Boyd
Details: 97 pages (this is a slightly updated draft from the Showdown) 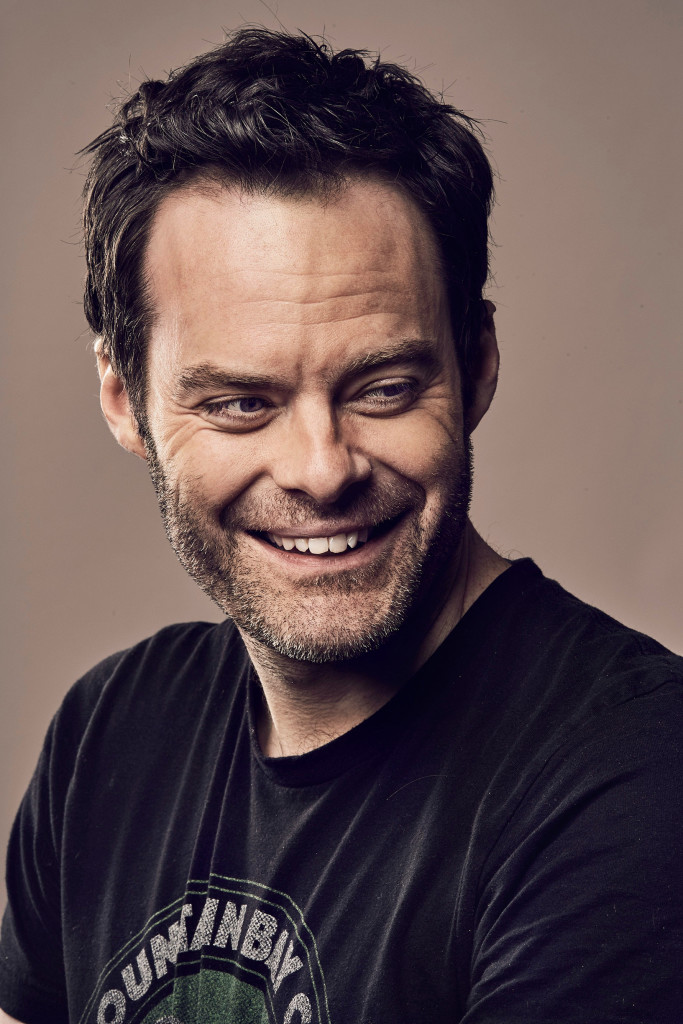 Full disclosure, I messed up.

I went back through all the recent Amateur Showdowns to find five second-place finishers who would compete in Second Place Showdown and I forgot who wrote Renaissance Men. I only realized after I put up the scripts that this was the same writer who wrote Jingle Hell Rock.

So while some of you may be upset that Eric got another shot at the prize, don’t be mad at him. Be mad at me. I’m the one who put his script in there. As far as fairness goes – hey, if you want to get that review you gotta beat the best, right? Eric’s one of the best we’ve had so when you face him, you’re going to have to bring it.

And look, the competition at the next level is a lot tougher than here on Scriptshadow. So you’ll have to beat guys like Eric regularly.

The year is 1524. Famous Pollack Copernicus has come up with a radical theory. Unlike how it’s depicted in the bible, the earth actually revolves around the sun, not the other way around. Copernicus’s goal is to head to Rome, pass this information on to the Pope, and become forever famous.

But just before he’s about to leave, he learns that his sister died and he’s in charge of her five children. The oldest of the children, Viv, is a firecracker who’s just as ambitious as Copernicus, and when Copernicus leaves and shows up in Rome a week later, he’s shocked to find Viv waiting for him. What are you doing here, he asks!

“Getting to Rome’s not that hard. All the roads lead here,” she responds.

Pissed off that he’s got this anchor tied to him wherever he goes, he pawns her off on his old pal Machiavelli, who’s pursuing a second career in acting. Then, just as he’s about to tell the Pope what’s up, a rival of Copernicus’s named Valentinus kidnaps the Pope, demands a ransom for his release, and frames Copernicus for it!

After getting tortured, Copernicus is able to escape and it’s then that he learns that not only are Valentinus and Machiavelli working together, but they plan to plant a thousand barrels of gunpowder under the Vatican and destroy it!

While Copernicus tries to save his niece, Queen of France Catherine de’ Medici shows up with her newest toy, her psychic Nostradamus! Nostradamus says that this is actually a lot worse than it seems. It turns out that the Pope is in on this too. They’re going to blow up Rome and begin hundreds of years of war.

Copernicus’s only shot at stopping this is teaming up with his old rival, Michelangelo (Copernicus has a lot of rivals), saving Viv from Machiavelli’s clutches, then getting to the bomb site and stopping this world-ending explosion from happening. Can he do it? Or will his giant ego and need to be remembered throughout all of history doom him?

I think he’s hilarious. On a site where we’re lucky to find a good comedy script once every other year, it’s nice to have someone who’s clearly talented in this genre.

And the best thing about Eric is how specific his humor is. Of all the Roman historians I know, I haven’t met a single one who can tell a joke.

Eric’s ability to both know this history and hit you with in-jokes about the era line after line is really impressive. I mean who do you know who can reel off a dozen jokes in a row about Catherine de’ Medici?

It’s also hard to believe that all these famous figures lived at the same time. By the time Nostradamus was thrown in the mix, it was pure comedy mayhem. 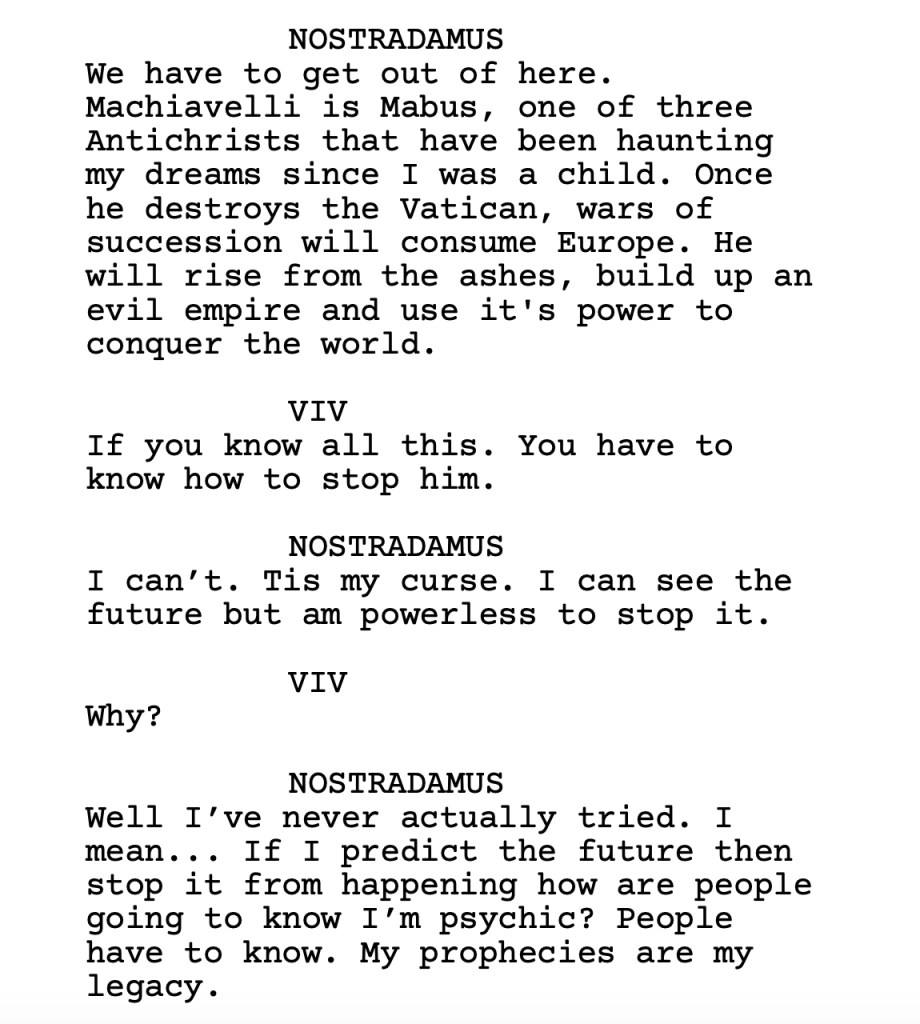 With that said, something wasn’t working as well as Jingle Hell Rock for me. But because I don’t know this era in nearly the level of detail that Eric does, it was hard for me to figure out why.

I think the most obvious problem I ran into was the overly dominant plot. In pretty much every scene, characters were dishing out exposition about where we were in the story and what needed to happen next.

Now the thing about comedy is that exposition is easier to write because you can do it in a fun way. Nowhere is this more apparent than in Back to the Future, which is one of the most plot heavy blockbusters you’ll ever see, and for that reason it has a ton of exposition. But it works because they make the exposition funny.

Marty’s “WTF” bafflement to Doc showing him how time travel works in that mall parking lot means we’re laughing in between every line of exposition. “Wait a minute, Doc. You’re telling me you built a time machine…… out of a Delorean???”

Eric does his best to do the same here in Renaissance Men. But the script was SOOO plot heavy that even when he’s cooking, the complexity of what needs to be conveyed wins out.

That’s one of the hardest things about comedy. Comedy scripts still need to follow the general rule of ‘every scene needs to move the story forward,’ but when people come to see comedies, they don’t come to see plots unfold. They come to laugh. So you’re performing this delicate trick where you’re always moving the story forward but not allowing the audience to realize it because they’re laughing so much.

But, most of all, I didn’t want characters talking about what they needed to do next, which encompassed a large percentage of the screenplay. It led to a lot of moments where I thought, “Hmmm… the *idea*of this is funny. But the execution isn’t making me laugh for some reason.”

Like going and finding the original model who posed for the Mona Lisa was a funny concept. I thought, “Oooh, that could be good.” But when she showed up, we didn’t get anything that funny out of it. There were a half-dozen situations like that where the idea of something was funnier than the execution.

That’s not unique to this script by any means. It’s a common issue comedy writers battle. Lots of people can come up with funny-sounding scenarios. But it’s your job, then, to figure out the funniest way to explore that scenario. There’s got to be a funnier way to get Mona Lisa in here than having her be a tagalong with a few sorta-funny lines.

With that said, there’s more good here than bad. Easily. I enjoyed reading Renaissance. I just think it needs one of those rewrites where your sole goal is to find as much humor as possible. Judd Apatow is famous for this. He makes writers go into their scripts all the time and come up with 30 more jokes.

But it’s not just the jokes. A joke is a line. A joke is a moment. You have to come up with really funny scenarios that do most of the joke writing for you. There is some of that going on here. But it needs more.

So I give a hearty thumbs up to you, Eric. Good job.

What’d the rest of you think? Also, curious to hear who you’d cast in all the roles!!

What I learned: “Jesus. She brought an army.” “Yeah, but it’s just a French army.” One of the easiest comedy devices to use is the “running joke.” You pick something and you just keep hitting it over and over. That’s the joke. Here, one of the running jokes is how pathetic the French are. So we keep hitting that joke over and over. Just make sure that the subject you use for your running joke is actually funny. 🙂

What I learned 2: In a comedy, you have to have WHAT YOU BELIEVE TO BE three stand out historically funny set pieces. They may not actually be historically funny. But you have to believe they are. One of my biggest issues with this script is it doesn’t have one. Whereas Jingle Hell Rock had 4-5.

Was I on the ball?
Thank me later.