“Guérillères” worked on me like a charm; as I watch it all makes perfect sense; especially, I have space to see the nonsense in it – Photo©MarcCoudrais

A couple years ago, my class was talking about the puzzle of sex education. Why is there no sex education? Everybodysays they want it, but, somehow, nobody ever gets anything but an embarrassed cough.

Tom, to whom Senator Josh Hawley, R-Nostalgia, and Rudyard Kipling before him, would point as a flower of the race – Indeed a boy: gifted with a penis, handsome, sweet, intelligent, with just the right whiff of privilege – speaks up. He says something like, Resistance to sex education is unconscious, mass-scale reaction, a silent barricade against Universal Liberty. If the people really knows about sex, he concludes, Goodbye, gender. And, Goodbye gender means, comrades, Hello, Revolution!

Tom’s right, of course. Ignorance about the “sex impulse”, as George Orwell I think used to put it, complicates undoing our gender knots.

And there is a shared conspiracy of silence around sex that keeps gender at the center of our lives.

But the question is, as it always is for everything, what to do until we get to utopia?

Josh Hawley, et al., are clear on their narrative: a racially-healthy Boy’s Own world trains its boys for the militia and fits its girls for wedding veils. On the other hand, as Tom and Juliette et al. claw, thrash and groan toward universal Aquarian liberation, at least part of the story-line is to let the girls play at warriors, just like the boys… like, uh, equal employment opportunity.

All this reflection on sex and gender bubbled up as I watched Marta Izquierda Munoz and her [lodudo] producciontroupe’s very entertaining, very informed, very well-played Guérillères dance performance at the Atelier de Paris the other evening. 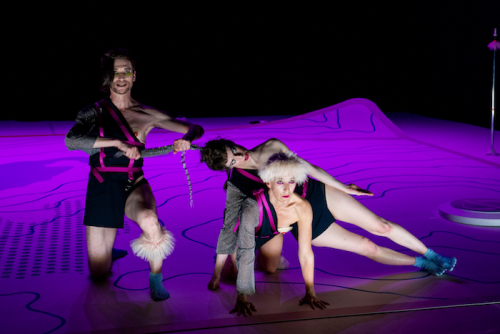 “Guérillères” got me wondering whether the cult of Amazons isn’t hiding its own racially-healthy “Girl’s Own” scenario: train the females for the militia then fit on wedding veils – Photo©MarcCoudrais

Guérillères – “Guerillas” –  bills itself as a “choreographic tableau of a community in action,” that is “chaotic, organic and utopian”. Guérillères pairs with another piece, Imago-Go, a 2018 creation featuring a “slightly dysfunctional” and stiff band of baton-twirling majorettes.

For the Atelier production of Guérillères, I was particularly struck by the costuming. As the troupe moves through a catalogue of Amazon – girl-warrior – gestures and poses, I am constantly aware of fuzzy garters against flesh and the girl-warrior tropes represented on each performer’s tee-shirt.

As I watch, the fuzzy garters remind me of an underlying eroticism in the action without pointing a type of sexuality. The tee-shirt images feature three Amazon brands: Wonder Woman-like bosoming-invincibility, a smooth-thighed mistress of the Thyrsus (you know, those magic-phallus things crazy ancient Greek ladies carry around just in case men come into the sacred glade, or something) and, finally, the doe-eyed Manga girl-hero, mouth in gigantic mid-shout. As Guérillères rolls out, these tee-shirt graphics become real archetypes and choreographic reference points.

Played as a triptych, as it seems to me, the lanky male performer, Eric Martin, and the svelte, deliberate Izquierda Munoz play straight an intensely comic Adeline Fontaine.

The shtick works like this: male Martin is the Amazon. Izquierda Munoz is a sort of imperturbable Glynda,  white witch, the one with the plan once you’ve brought back the ruby slippers. Martin is as solid a warrior girl as comes along. His get up pre-empts whatever homo-erotic expectation of transvestitism I might have; Martin wears his fake and exposed amazon tit with as much – and not a whit more – elegance as either Fontaine or Izquierda Munoz wears theirs. Fontaine’s superb “power” aping and grimacing and her sans-pareil air-weapon handling – bow & arrow, machine gun and broadsword, thank you – make her the Warrior Martin’s Amazon, to Izquierda Munoz’s white witch.

It worked on me like a charm; as I watch it all makes perfect sense; especially I have space to see the nonsense in it.

To think I almost didn’t go because it sounded like politics to me.

I go to dance performance to stimulate my Imagination, not to have somebody’s story-line shoved in my face. So, politics – especially my own politics – pissed over even very good dance tends to keep this roach out of the hotel.

But Marta Izquierda Munoz and the [lodudo] produccion troupe know how to turn concept, choreography, performance technique and set into a happening now where Imagination can undo whatever story-board a spectator has in their head and laugh about it, to boot. For me, Guérillères works out as the first satire that I have seen involving re-gendering, ungendering, whatever.

Marta Izquierda Munoz’s piece is not only refreshing, it also has got me wondering whether we ought to dump this girl-warrior narrative from the politics of Aquarian liberation. After all, let it be bosomed and in skirts, the Amazon trope is a warrior trope. And it’s pretty damn dumb.