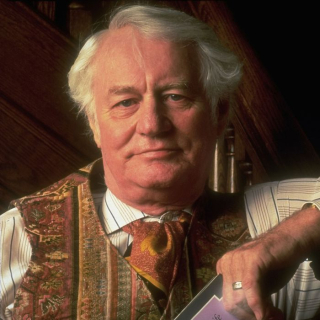 It was he who gave me the idea of

writing a poem each day, which is what he was doing

in January 1996, the coldest January in years

at Bennington College. He wrote first thing in the morning,

before coffee (if he ever drank coffee)

He would sit up in bed, in close contact

with what he called his reptilian brain, and write when

travel across the Maginot Line of consciousness

went both ways on uncongested highways

and took unpredictable turns — not a metaphor

Bly would have liked, by the way, not only

because he didn’t go to history for his rhetoric

but also because, dreadful as it was,

the world did not face what France faced in May 1940.

Robert liked images, a turtle, a spear, an onion, a castle,

and wishes, like the desire to travel far or

to be in Paris on a Thursday on your last day alive.

A big man, the author of “The Teeth Mother Naked at Last,”

Robert was said to be cantankerous but I found him generous,

loyal, an excellent teacher and raconteur,

and it was a joy to work with him on The Best American Poetry 1999.

On publication of Robert’s Morning Poems, the product of his practice of writing a poem a day first thing on the morning, I wrote,

is a sensational collection — Robert Bly’s best in many years. Inspired by the example of William Stafford, Bly decided to embark on the project of writing a daily poem: Every morning he would stay in bed until he had completed the day’s work. These ‘little adventures / In Morning longing,’ as he calls them, address classic poetic subjects (childhood, the seasons, death and heaven) in a way that capitalizes fully on the pun in the book’s title. These are morning poems, full of the delight and mystery of waking in a new day, and they also do their share of mourning, elegizing the deceases and capturing the ‘moment of sorror before creation.’ Some of the poems are dialogues where unconventional speakers include mice, maple trees, bundles of grain, the body, the ‘oldest mind’ and the soul. A particularly moving sequence involves Bly’s imaginative transactions with a great and unlikely precursor, Wallace Stevens. The whole is a fascinating and original book from one of our most fascinating authors. >>>