The last time I saw Tim Dlugos was 30 December 1989. We met for dinner at Kramer Books & Afterwords, the first bookstore/café in the land (as far as I know). It’s one of the few independent bookstores still going strong in DC, but probably more because of the food than the books. Tim had been battling AIDS for a while, and I remember being a little apprehensive about seeing him, wondering to what extent the disease might have changed him. So his arrival came as a relief, a cause for optimism—he looked better than ever, and seemed full of energy and purpose. 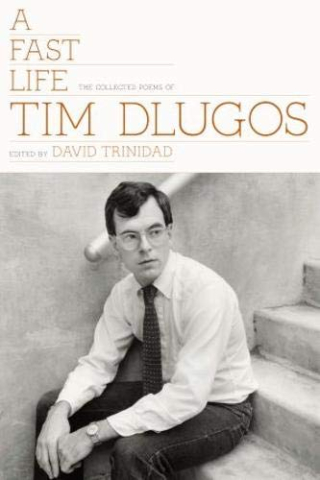 Starting in the early 1970s, Tim and I were part of a group of poets who participated in an open reading every Monday night in a room over the Community Book Shop in Dupont Circle in DC. The readings, called Mass Transit, were started by Michael Lally in 1971.  Mass Transit was a poetry lab, where all experiments were welcome, or at least tolerated. Many poets came up through Mass Transit, and became friends—Ed Cox, Lee Lally, Beth Joselow, Tina Darragh, Pete Inman, Liam Rector, Lynne Dreyer, Phyllis Rosenzweig, and Bernie Welt, to mention a few. We hosted a reading series at the Pyramid Gallery, bringing poets like John Ashbery to town to read with local poets. We also started a publishing venture called Some of Us Press, bringing out chapbooks by everyone from Ed Cox to Bruce Andrews. Michael left for New York in 1975, and I think Tim left town around the same time. Fortunately, Doug Lang appeared on the scene and, in his capacity as manager of Folio Books, also in Dupont Circle, became the same kind of catalyst that Michael Lally had been. Doug’s Folio readings featured Ted Berrigan, Tom Raworth, Ray DiPalma, Barbara Guest, Maureen Owen, Susan Howe, Fielding Dawson, Ted Greenwald, and dozens of others, each usually paired with a DC poet. Doug, who started a small press called Jawbone and was part of another called Titanic Books, also hosted a number of workshops, whose participants included Diane Ward, Joan Retallack, and others.

In fact, Some of Us Press published High There by Tim in 1973, which I believe was his first book, and in 1977, Jawbone brought out Tim’s chapbook For Years. In New York, Tim seemed to flourish. He became editor of the St. Mark’s Poetry Project newsletter for a while, his magnetism and openness as a person always drawing people to him. He also partied hard in the big city. Later, in poems like “Powerless,” he would write with great passion about getting sober.

Tim’s masterpiece is the poem “G-9,” named after the AIDS ward at Roosevelt Hospital in NYC. I’m not an expert in the literature to come out of the AIDS epidemic, but it’s hard to believe there is anything in that body of work more vivid and powerful than this poem (here’s the text of “G-9”). In November of 1989, Tim sent me a fat envelope of poems—“Here are the fruits of my hospital stay and my first week out.” I was blown away the contents, which included “Powerless” and “G-9.” He was doing his best work in his final year of life.  “G-9” was accepted by the Paris Review not long before Tim died, of complications from AIDS on December 3, 1990, at age 40. He never lived to see the issue (#115) come out, but he was delighted to know that it would be in the magazine.

The good news is that Tim’s friend, the poet David Trinidad, is working on the first complete poems of Tim Dlugos. I’ve looked at a chunk of this manuscript, and I very much believe its publication will be a landmark literary event, bringing back to public attention an amazing and important writer. Like Whitman, Tim, through his poems, seems to be with us still. (Wikipedia entry on Tim: click here.)

In his research, David came up with a poem by Tim that I had no memory of, but was very grateful to have. I think the poem is from 1973, when I was the poetry book buyer at a shop called Discount Books:

this p.m., I finally found his address.

the star that the statue on the fountain

at the Circle resembles: not Leslie Howard,

again tonight, the 4th night in a row.

and might go to bed with when parents split

a tremendous break and move to New York City

to Terry as I just walk past, his waving back

a p.m. highlight and distinct possibility.